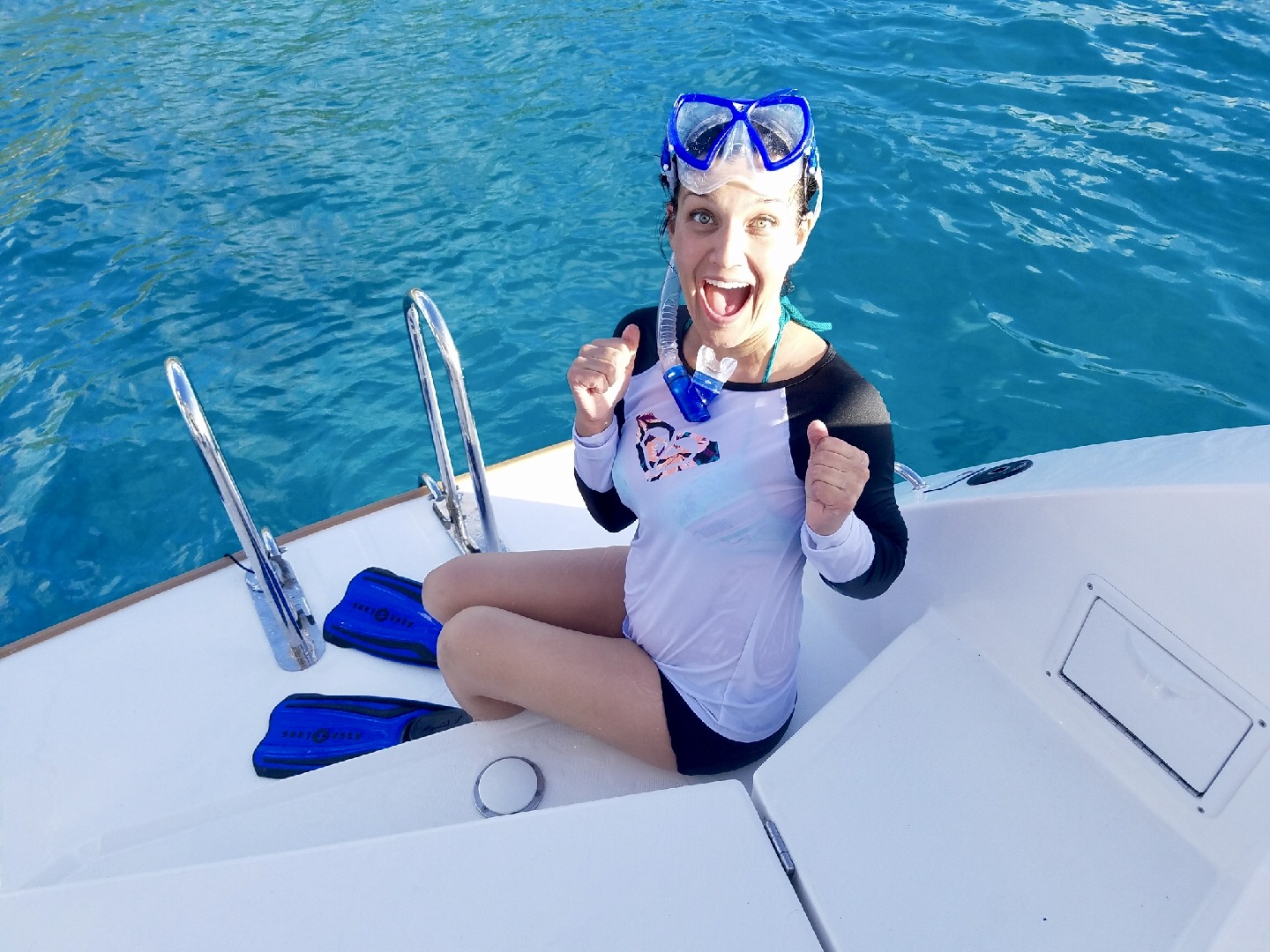 A California native, I’ve spent most of my adult life landlocked and working in the IT industry in Colorado. While employed full-time and raising three sons, I managed to indulge my love of nature and thirst for challenge and outdoor adventure through trail running, backpacking, and mountain climbing. Pining for the ocean that I learned to love in childhood, I returned to California in 2013 to seek new adventures.

My sailing story begins in March of 2016 with stepping aboard and looking down the companionway of a Catalina 34 MkII named Pink Slip. I immediately thought to myself, “I could sail around the world in something like this.” The sail that followed was mostly dull and windless, until the last 20 minutes when the wind suddenly gusted to 20 knots, followed by an accidental jibe and a near-broach. I was hooked. I immediately knew I was onto something that would be life-changing for me. Before that day, I had never stepped foot aboard a sailboat.

A few sails later, I knew that I had to find a way to make sailing a bigger part of my life. To be honest, for me, working in a cubical all day was a kind of soul-crushing misery and I desperately wanted to escape. I had wanted out for years. I earned enough to provide myself and my sons a modestly comfortable middle-class life, but not enough to break free. By the time I had discovered sailing, 18 years of computer use had taken its toll on my body and I struggled with near-constant arm and neck pain. But what else would I do?

Living in the high-cost Bay Area, I was only just getting by and couldn’t imagine how I would afford to take sailing classes and eventually buy and maintain a boat of my own. The notion of earning an income as a writer also seemed like a pipe dream, especially after a childhood of indoctrination with the idea that writers starve and a good government or corporate job with benefits and a pension is the only way to go. I’d had such jobs before, but the only time I felt really alive was outdoors, in nature.

With my sons now raised and on their own, it was my time do what I wanted. I was free to try a different path… a path of my own design and making. I asked myself if I could do anything I wanted and make a living from it, what would it be? The answer was simple. To sail. And, because I love to write, to write about sailing. To follow my passion demanded creative problem-solving and taking some chances. I was determined to find a way.

In March of 2017, I finally decided to quit my stressful job as an IT support technician to look for work in the sailing industry. When I saw Modern Sailing School & Club’s ad for a Customer Service Representative on CraigsList, I knew the job was for me. My first day was May 1, 2017 and I have worked for MSC in many capacities ever since – as a Customer Service Representative, the CEO’s executive assistant, the team’s IT support technician, a systems and process analyst, the office manager, and ultimately, my favorite role, the writer of MSC’s weekly newsletter and website content. With each of my various duties and roles, I have never loved any job more than I have loved working with Modern Sailing – as I have never loved any endeavor more than I love sailing.

It’s a good thing I loved it all so much – because leaving my job in IT meant spending my first year as an MSC employee sleeping in my Honda Element 4 nights a week and the other 3 nights aboard a leased sailboat. I simply couldn’t afford to rent sticks-and-bricks in the Bay Area on Customer Service Representative wages. Yet I had never been happier nor felt more alive. I absolutely loved the wild, unconventional path I was on, even if it sidelined my dating ambitions. Living in my car and on a boat with dreams to sail around the world… I wasn’t the best long-term relationship prospect for any of the men I met in the Bay Area.

Two of the benefits of working for MSC were free ASA sailing courses and being able to take out the smaller boats for free after work. Within two years, I had earned ASA certifications up to ASA 106, Advanced Coastal cruising, and logged over 100 days on the water sailing with my coworkers and mentors at MSC.

Inspired by sailing and van life YouTubers, I decided to start my own YouTube channel, Sailing Novaturient, and discovered that my brain loves editing video even more than it loves writing. Editing video is low-hanging dopamine! (Writing feels a bit more like work.) An innately strong creative impulse in me has manifested in various ways throughout my lifetime… writing, drawing, painting, photography, gardening, even aquarium-keeping. I found that editing video easily satisfies my creative urges, although I have to pace myself because too much time on the computer fries my arms. Working full-time in the Modern Sailing office, I didn’t have much left for my YouTube channel. I only managed to put out ten videos in two years.

In early 2018, I had the opportunity to work as a first mate and chef on a private catamaran charter in the British Virgin Islands with one of MSC’s captains. By the end of that charter, I had fallen in love with tropical sailing and it wasn’t so easy to be satisfied with simply sailing after work on San Francisco Bay anymore. I craved new horizons, blue water, tropical breezes, warm sunshine, and nights on anchor being rocked to sleep with the sound of water lapping on the hull around me.

By the end of that year, I’d also bought my first boat – a derelict but salvageable Islander 28 – for only $910. I cleaned her up, made her my home, and learned that I truly loved the liveaboard lifestyle… until the seemingly endless days of cold winter rain arrived. I could no longer resist the call of blue water and warm sunshine and I became restless. It was time to get moving.

Thanks to my mentor Captain Bill and CEO Leigh’s support and encouragement, I had developed my skills and confidence as both a sailor and a writer. My role with MSC would evolve and continue as a remote employee when I moved to Florida in search of warmer sailing and a lower cost of living.

Shortly after I moved to Florida, I had the good fortune of meeting another sailor, Tim, who grew up in the Bay Area. Like me, he had cut his sailing teeth on San Francisco Bay. Also like me, he had a dream of buying a bluewater boat and cruising his way around the world. As our relationship grew, we frequently sailed his Hunter 30 on the turquoise waters of the Gulf Coast together and began to form a 2-year plan to buy a bigger boat, cut the dock lines, and sail away.

But then, COVID-19. In April, Tim was laid off from his job in the aviation industry. We talked it over and decided that the time to buy a bluewater boat was now or never. In July, we found a cutter-rigged 1993 Oyster 435 sloop for sale on the island of Carriacou in the Caribbean. After all the necessary surveys, we bought her sight-unseen and began to sell everything we owned. It seemed crazy to our friends and family, but to us, not doing it seemed just a bit more crazy.

At the time, Grenada’s borders were closed and we had no way to get to our new-to-us boat. I also sadly figured that the coming change would be the end of my time with Modern Sailing, but I was mistaken. To my surprise, Leigh and Bill were thrilled for me and agreed to continue my remote work arrangement.

On October 17, as our plane descended over sparkling blue Caribbean waters to land on Grenada, I shed a few tears of joy. I was so happy to be back in the Caribbean! After five days of quarantine and negative PCR test results, we donned our masks and boarded a small ferry for a wet and wild 3-hour ride to Carriacou. Five weeks of sweat, blood and tears later, our boat finally splashed into the clear waters of Tyrell Bay and we began our life together as full-time cruisers.

So now here I am, preparing to sail around the world, living on a beautiful bluewater sailboat with a sweet sailor man, and getting paid to write about sailing. If someone would have told me four years ago that this was where I would end up, I would have been very skeptical, but I would have thought it was pretty cool. I couldn’t have imagined a better outcome (except maybe winning the lottery and buying a brand-new 60′ ocean cruiser)… and to think, the story is only just beginning.